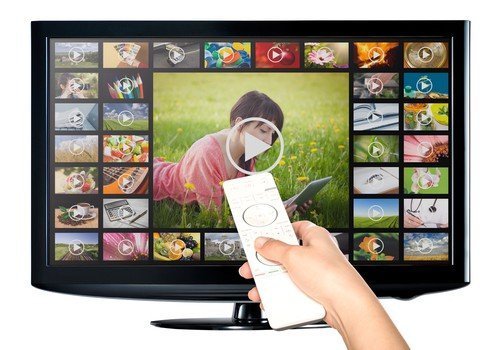 A lot is happening fast in the world of over-the-top (OTT) television. Just in the last few weeks Apple launched its highly anticipated Apple TV+ (Nov 1) and Disney opened its famous content vault via Disney+ (Nov 12). Given this massive industry disruption and Vocap’s interest in media, entertainment and marketing technology, we set out to demystify the landscape, codify our perspective on the future and identify opportunities for tech startups.

If you are highly confused by what’s happening in the shift to OTT, including who fits where and how the money flows, then you are not alone. The landscape is extremely complex and rapidly changing. Take my consumer stack for example: I get my internet via Google Fiber, I have a Roku device connected to my TV, and I subscribe to YouTubeTV where I can watch various content channels like NBC and TBS with ads. I can also flip over – via my Roku device – to Netflix, Amazon Prime Video or HBO Now and watch on an ad-free basis. By the way, Google owns YouTube, Amazon obviously owns Amazon Prime Video, AT&T owns Warner Media which owns TBS and HBO, etc. etc. How are my subscription dollars allocated along the supply chain and who captures the value of my ad-supported viewing hours? The chart below from 2018 (which is already dated) gives you a sense of the corporate repositioning and disruption occurring. Note the massive consolidation among incumbents and the ominous reference to well-resourced disruptors on the bottom right. 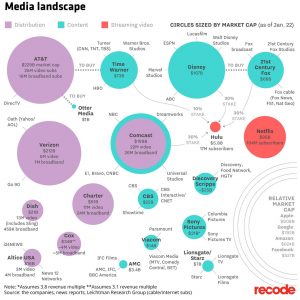 It’s hard to keep up, and clearly the stakes are high: the major players are investing tens of billions in content and audience acquisition. Big companies are betting big. Fortunes will be made and lost.

It should be noted that this post does not address live media (i.e. news and sports) which has its own, different set of dynamics. We had to define the scope somewhere.

First, I’ll attempt to define the OTT value chain in traditional terms. These analogies aren’t perfect (please cut me some slack); I’m primarily interested in establishing a vocabulary for the reader’s clarity. Keep in mind that most media conglomerates operate across – or bypass – these functions:

Although most of the major players including Netflix, Amazon Prime, HBO Now and others are currently SVOD, AVOD and hybrid models are gaining momentum. Hulu, for example, offers ad-supported streaming with their basic service, and Amazon offers customers one-off purchase options for movies and shows.

Currently, the top four OTT platforms are Netflix, Amazon Prime Video, Hulu, and HBO Now, but they face rising competition in the form of new AVOD offerings from the likes of Viacom (PlutoTV) and Comcast (NBCUniversal’s upcoming service: Peacock), as well as SVOD offerings from AT&T (HBO Max), Disney (Disney+), and Apple (AppleTV+).

The industry now seems fixated on both owning content and packaging it into their own OTT apps. Coming from one end, traditional media companies are beginning to concentrate their content through their own new direct offerings. Coming from the other end, digital aggregators are investing heavily in original content (e.g. Amazon Prime, Apple TV+). Whether this vertical integration is sustainable for more than a few select behemoths is another question.

Why AVOD is gaining steam

In short, AVOD is gaining traction in the current environment because it theoretically works for all primary stakeholders:

Key Consumer Benefit: Not Another Subscription

Consumers are showing clear signs of subscription fatigue as the supply of direct SVOD alternatives begins to outstrip demand. Numerous surveys point to oversaturation, and perhaps even more telling is that acronyms have officially entered the public discourse (e.g. see YASS: Yet Another Streaming Service).

Conversely, AVOD services require no upfront or ongoing commitment. As a consumer, I can dip in and dip out as I please, which means more breadth of content options. That’s appealing to me, and I’m willing to bear through limited ads for this access, but I would not tack on my fourth OTT subscription for the right do so.

Incumbent, pureplay media companies (Warner, Viacom, etc.) face an uphill, and possibly unwinnable battle for direct-to-consumer SVOD supremacy against the new entrant players (Netflix, Amazon), primarily because they are too far behind in the user economics flywheel. Consider how Ben Thompson of Stratechery contextualizes the $85M per year to be spent by HBO Max (playing SVOD catch-up) for the Friends sitcom which is currently licensed by Netflix (SVOD winner apparent):

Talk about barriers to entry. AVOD, however, provides a viable path for traditional media companies that don’t have:

Unlike SVOD publishers with subscription paywalls, AVOD publishers can attract and monetize transient viewership. Though revenue per user for AVOD is currently a fraction of that of SVOD, I believe this gap will shrink and more importantly, AVOD may allow providers to sidestep the bloodbath of competing for direct SVOD supremacy. As the also-ran OTT providers struggle to aggregate enough users to make the SVOD economics work, I expect they will increasingly embrace AVOD. For example, NBC Universal’s large upcoming OTT offering, Peacock will be largely ad-supported, a significant departure from the strategic approach of some other large new entrants.

Additionally, AVOD presents a more palatable gateway to OTT for traditional TV media companies which still rely heavily on advertiser relationships to drive their core business. AVOD can be a supplemental offering to these advertisers and mitigate the risk of upsetting these highly lucrative partnerships.

When the dust settles, I suspect you will see – within direct SVOD services –  just 3-4 anchor providers and a few niche, “destination” providers with pre-existing followings (e.g., HBO). The middle, including most incumbent media companies, will rely heavily on AVOD. One key question is which, if any of this middle group will gain real traction going direct-to-consumer with the AVOD model, and which will settle for reseller bundles.

I largely agree with Ben Thompson’s view of the future of TV as illustrated below, except my slight revisions in red (note: news & sports and the role of YouTube are outside the scope of this post): 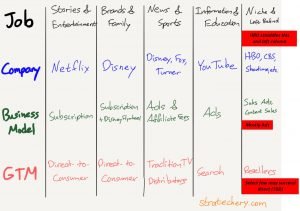 Distributors such as Roku and Amazon Firestick view AVOD as their primary growth driver, which makes sense given the relatively minimal value they’ve been able to capture from their anchor SVOD agreements (e.g. Netflix acts as loss leader for most distributors). To the major SVOD providers with legitimate consumer pull, distributors are simply the conduit to the consumer with little bargaining power. To AVOD providers, however, the distributors have a stronger value proposition, especially as they continue to scale their user bases, mature their programmatic advertising infrastructure and refine cross-app behavior analytics. I expect distributors to increasingly push users to AVOD content because they partake in the upside of these incremental hours and this flow perpetuates the advertising flywheel.

The rise of the Connected TV (CTV) represents a massive new advertising platform opportunity not unlike mobile 10 years ago. A well suited medium for ad delivery with exploding ad inventory, CTVs’ large screens and captive audiences keep users more engaged for longer. According to Extreme Reach, a digital ad platform company, CTV ads now account for a full 50% of all video ad impressions – twice that of mobile. Additionally, CTV ads have the highest ad completion rates of any platform (source). Viewers of ad-supported content are also showing greater receptiveness to advertising that brings them the content they want. On top of this, AVOD enables precise targeting based on known users and households, not inferred stats.

Important note: while the advertising promise of CTV is exciting, we shouldn’t get ahead of ourselves. The CTV ad marketplace infrastructure is still relatively nascent both technically and commercially. Most of the industry insiders we’ve talked to caution that advertisers are still making sense of this new landscape, including how to think about pricing and budget allocation, and the programmatic ‘pipes’ are certainly not as mature as digital or mobile.

Opportunities for Tech Startups in OTT:

The technology that powers OTT is still nascent, and much of it has been developed in-house out of necessity by the large players for their own use. That said, we are optimistic that there are opportunities for emerging tech startups. It used to be that media companies would simply produce and sell content to the highest bidder. Now, they own the delivery and user experience bringing a multitude of new challenges to be solved. Consumers expect frictionless streaming, 24/7 access on any device, personalized curation, etc., etc. and will not hesitate to take their eyeballs and wallet elsewhere if expectations are not met. Penthera, for example, was formed by industry veterans who observed this growing need. The company provides software that optimizes the delivery of video to mobile devices (e.g. download-to-go) so OTT providers can give their viewers a seamless experience.

Within AVOD, there is a growing need for better orchestration, delivery, and attribution. Startups like Adsparx go deep into the nexus of monetization by detecting ‘broadcast Ad breaks’ from original broadcast content in real-time and replacing them with user-targeted Video Ads.

Given this enormous industry transformation and Vocap’s interest in media, entertainment and marketing technology, we want to talk to more companies innovating in this arena. If you know of any early stage, revenue generating technology companies with a clear go-to-market strategy, please reach out!