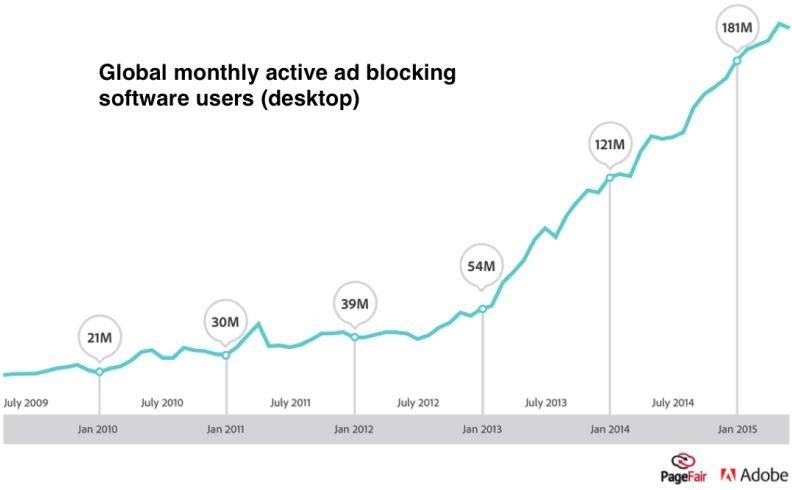 A lot of attention has been given to the rise of ad blocking apps, particularly in light of Apple’s recent release of their new mobile operating system, iOS 9, which facilitates ad blocking on mobile websites (A Day After iOS 9’s Launch, Ad Blockers Top The App Store).  This is certainly a monumental move which has predictably stired a great deal of controversy in the last few weeks.  But the truth is that the ad blocking trend has actually been growing for several years now – long before the release of iOS 9.

Like most consumers of digital media, I welcome the opportunity to streamline my user experience. Let’s be frank, who doesn’t find ads, by and large, to be a nuisance? Even some of the better ads are only a baby step above clutter.  I – like many I suspect – have become highly desensitized to most digital display advertising. And now that this type of subconscious mental blocking is increasingly taking the form of real blocking, many are crying foul.

To a certain extent, one can sympathize with the authors / publishers affected by this, particularly those that don’t have the critical mass viewership of the mainstream players.  Many publishers argue that enduring ads, cookies, etc. is the price each viewer implicitly agrees to pay in order to access ‘free’ digital media content… that there is some sort of moral agreement between the readers and the authors / publishers.  They assert that, without those ads, there would be little to no economic incentive for anyone to produce publically available content. As the Verge recently put it in a particularly dramatic piece, eliminating those ads would bring the slow death of the web.

Ironically for publishers, it seems that this so-called disaster is partly of their own making.  The digital display advertising market has over-indulged and it was only a matter of time before the digital consumer was empowered to do something about it.  Many suggest we are simply seeing the natural evolution of business: what’s good for the consumer will eventually prevail in a free market (interestingly, some of the tactics under consideration to combat ad blocking seem reminiscent of the music industry 15 years ago).  And despite all of the doom and gloom retoric, this is not the end of digital advertising or free digital content – far from it.  Advertising will adapt.  Ads are already taking different forms, becoming smarter and more useful because they have to.  As they say, what doesn’t kill you, makes you stronger (or at least better in this case).  We think advertising based models on mobile and the web will survive, and look forward to backing the entrepreneurs driving the next wave of ad tech innovation.