TAM Part 2: How to Expand Your Opportunity

Few things are as important as picking your market(s). In my first post on total addressable market (TAM), I argued we should guard against being too myopic on TAM because it can change and expand over time. Since publishing part 1, we’ve had a lot of lively discussion both internally and externally. Clearly it struck a chord with a broad audience.

So how exactly does a company go about expanding its opportunity over time? To help navigate this important and natural next question, I’ve been developing a new framework shown below.

At its core, TAM growth is a function of expanding at least one of three components: who you sell to, what you sell and the price you charge. Sounds obvious enough, but as you’ll see, applying this model correctly can provide much needed clarity and creativity at critical junctures in a company’s journey to scale. 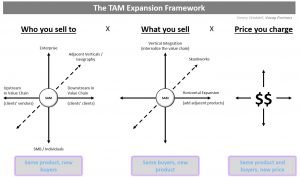 Key Considerations When Using the Framework

Granted, some businesses face a deeper chasm between these vectors and I’m not suggesting any business can become Amazon given great execution (see case study below). But the point remains: it’s the rare exception in which a business simply has nowhere to go. When evaluating how to expand your opportunity, keep in mind the following.

The next logical question is how to evaluate and prioritize these expansion opportunities. This part is absolutely critical and often separates the breakout winners from those that plateau: the paths are likely there, but effective navigation is key. Here are some key considerations:

I think a good rule of thumb for scaling companies is to always have the next one or two TAM expansion opportunities in the works, even if the remaining runway with the current product and target market seems long. These vectors often take a while to spin up and the next investor / acquirer will need to see upside – the ‘meat left on the bone’ – to justify a high valuation. The sooner you start collecting data points to validate those incremental opportunities the more credit you’ll get.

The best strategists I’ve seen also recognize that none of this should be done at the cost of the company’s core competency or what makes the product compelling to the core market. Assuming the core business isn’t completely broken or facing total obsolescence, TAM expansion efforts should both reinforce and leverage the core strengths.

Determine if the new part goes to a different machine:

When you change either market or product, consider whether you need to also change your channel or model. One of the biggest mistakes is thinking you can just change one of those four elements and then sales will hockey stick. Brian Balfour who helped Hupspot build its self-service product for individual sales reps (an unusual example of a saas company going down market with a new product) has a great series on this.

Growth along any of these vectors can happen either organically or inorganically (via acquisitions). For the purpose of this piece I’ve focused on the organic path which is much more common in the early/mid stage of a company’s maturation.

Amazon is perhaps the most famous case study on expanding from an initial addressable market. There’s a frequently quoted criticism from naysayers in the early days of the business: “Amazon sells books”. Yes, that’s where they started, but obviously they do a little more than that now. Let’s look at the TAM expansion framework to see some ways the company went from an “online bookseller” to the global behemoth it now is. Note: this case study is decidedly incomplete as Amazon’s customer base and product offering is extraordinarily diverse. It’s also difficult in many cases to distinguish between customer, supplier and partner in the Amazon ecosystem. The point is to provide examples of Amazon’s TAM expansion maneuvers over the years by using the framework in action.

Some commentary on the vectors in this example:

This is a great topic and one that doesn’t get enough attention. Few things are as important as picking your market(s). I’m sure I’ll continue to learn and refine this framework as I apply it to the businesses we work with (I already have).